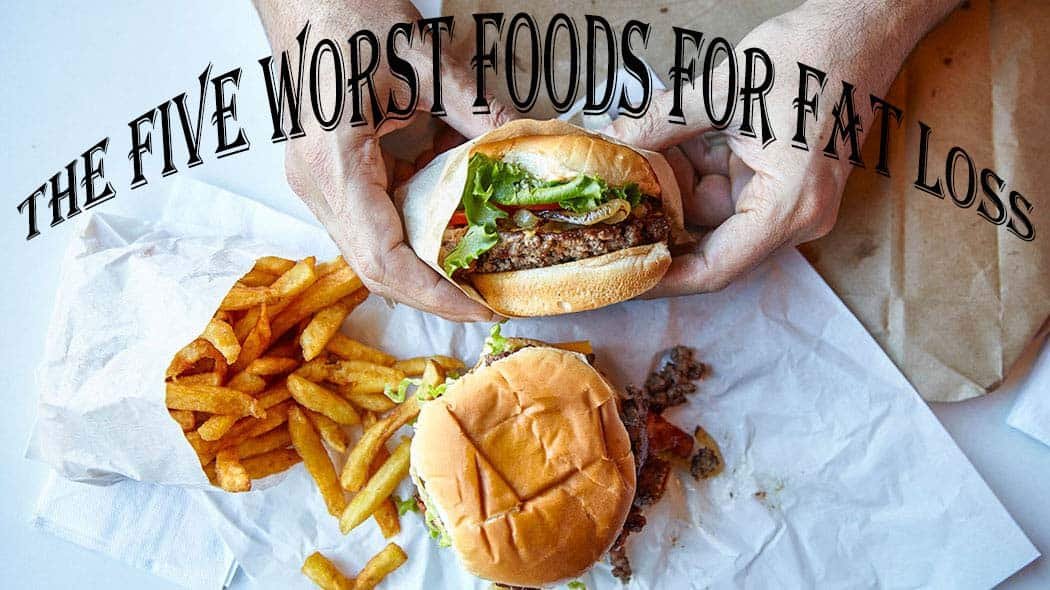 Hi, guys!I’m trainer Abidine from Getfitnwell.com and today we’re going to do a sit-down talk about the five worst foods for fat loss.So,

as we all know, sugar, too high in calories spikes your insulin.We know that it’s not good for your fat loss.But let’s dive a little bit deeper into some things that I think are important to recognize with habits and how you eat, and choices that you’re making that really aren’t going to help with your fat loss, other than just knowing sugar, too high calories, fat, too high fat.What is a little bit more of the details that we need to focus on?

thinking about combination foods like chips, or candy bars, or things that have both fat, and carbs, and sugar.The combination of those tougher is really what is not going to make you full.You’re going to eat those and about two, three, or four bites and you’re not going to feel satiated.So that’s one thing you want to really avoid when you’re trying to lose fat.It’s not that you can’t lose fat with those types of food, but it’s a great tip to understand that when you’re going to consume fat and carbs at the same time, in just one food, they’re really not giving you the most bang for your buck.So that’s my number one tip to avoid.

As we all know alcohol is not that great for you.The whole beer belly.It’s true, it is true.Avoid the alcohol.It responds differently in the body.It increases your blood sugar levels and adds more body fat and that’s not our goal.So avoid alcohol.

feed bags. Costco bag sized – huge – that you’re opening and there’s a bottomless pit.That’s another tip that I would offer you.It’s not necessarily that type of food, but it’s that you can’t stop.It’s a large bag, you’re opening it, there’s not serving size control.So what you’re doing is allowing yourself to eat more than you realize.

anything that is fat-free. Like fat-free ice cream, fat-free cookies, fat-free Fig Newtons, right? All of those things we’re thinking, There’s no fat in them.They’re better for me! Well, at the same time you’re going to probably eat more than one, more than two, and that’s where we don’t want to go.So remembering that.Just have one or two of the full-blown fat-non-fat or the one that does have fat in it.The Fig Newton, or ice cream, but have some portion control on it. But it being fat-free also means there might be extra sugars, extra carbs in there because they want to pump up the flavor in those items. So avoid the fat-free items.

pop, juices, drinks that have sugar in them.So you’re spiking your insulin.You’re not getting much bang for your buck there either because it’s a drink and in one can of soda it’s 45g to 50g of sugar and that’s not helping you with your fat loss goals.Same thing with juices.We think they’re orange juice, we think it’s apple juice, it’s good for us.Well, I would much rather you do maybe even a juice that has some kale in it, or a juice bar, or create your own. But when you’re getting condensed orange juice or condensed apple juice it has much higher sugar content in it.Drink water.So avoid those top five things and you’re well on your way to fat loss.