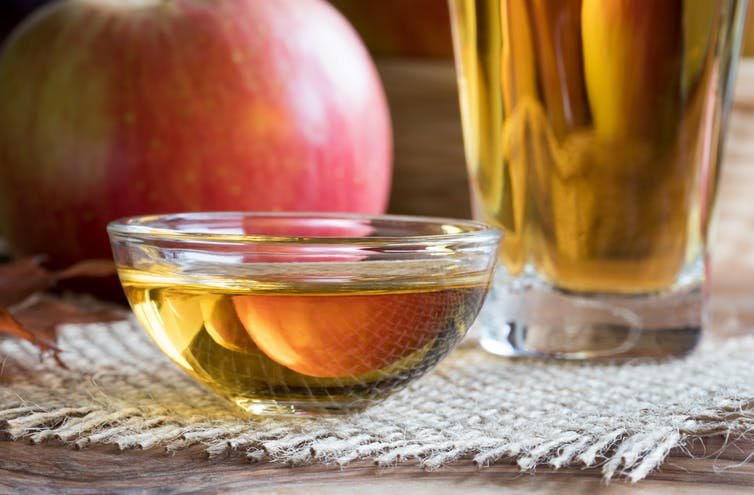 The use of apple cider vinegar in a medicinal way traces back to ancient Greece. It’s been said that the so-called “Father of Modern Medicine,” Hippocrates, used it as a healing elixir.

There are many benefits of apple cider vinegar, and these benefits have been touted by both health professionals and naturalists alike. It’s a true testament to the goods that people are continuing to use apple cider vinegar in the 21st century for the same healing benefits.

The following, then, is a list of the many benefits that you can expect to get from using apple cider vinegar on a daily basis:

The 8 Benefits Of Apple Cider Vinegar

Raw, unfiltered vinegar — whose parts are sometimes called the “mother” — can be used as an effective household cleaner. Because of the concentrated nature of the vinegar, it can actually have more antibacterial qualities than a commercial vinegar you’d buy in a home improvement store.

Apple cider vinegar can also help you get rid of unpleasant, deep-set odors in your house. Mix one part of vinegar with two parts of water, then apply it liberally to the affected area. You may have to do this a few days in a row in order to completely neutralize the smell, but this is a quick and effective way to get the job done!

Are you insulin-sensitive? Take two tablespoons of apple cider vinegar before you go to bed. Researchers have tried this out in several studies, and have confirmed that the active ingredient in the apple cider vinegar — acetic acid — has been shown to lower blood sugar levels by almost 6%.

Even more along those lines of insulin sensitivity, apple cider vinegar has been shown in these same studies to suppress appetite, which will help you eat less, which — in turn — will help you lose weight. Sometimes, one of the biggest causes of raised insulin is over-eating, so by taking apple cider vinegar, you’ll be circumventing the problem at its root!

Some naturalists suggest that apple cider vinegar “detoxifies” the body by increasing the circulation in the body, thereby improving the detoxification processes. While no extensive studies have been conducted to confirm the success of something like this, there is plenty of anecdotal evidence to suggest that this, indeed, is yet another benefit of apple cider vinegar.

Finally, but certainly no less importantly, consider the positive effects of apple cider vinegar on the rest of your body externally! Some studies have suggested that applying apple cider vinegar to your skin, especially after you are on the receiving end of a pretty nasty burn, can prevent scarring and promote the healing process. You can also use apple cider vinegar to keep a sore throat at bay, decongest sinuses, and even give you a much-needed energy boost throughout the day (it’s a much healthier alternative to coffee, whose high acidic levels and caffeine make it quite unhealthy, especially in large doses).